Thursday and Friday we had a 99 cent sale of Death by Cliché on Amazon.com. If you are connected to me in social media, you probably saw the couple dozen messages touting the fact. This was my first big sale, and I prepped for it hard.

In fact, I was originally told the sale would be the week before and that I had about three days notice, to which I promptly fell into a screaming pile of panic. Mainly because all of my methods of effectively getting the word out involve podcasts, and you can’t get guest spots on podcasts scheduled, recorded, and released with three days warning.

Also, Salt Lake Comic Con was about to happen, so no one would be returning my proverbial phone calls anyway.

Luckily CQ was able to push it back a week, and so the sale happened on September 8th and 9th. I managed to get an interview out on Dungeon Crawlers Radio, the Hello Sweetie Podcast, and various shows from the Defenestrate Media Network, as well as on schlockmercenary.com. They started dropping Wednesday and Thursday.

Thursday and Friday I was a bit of a wreck. I hadn’t had enough warning to take time off work, so I automated all my social media posts about the sale and just checked in at lunch to see how things were going. As with most of these things, I didn’t do as well as I hoped, but I did far better than I feared.

I’ve been using Novelrank to estimate my sales, but I did receive firm numbers from the publisher. The book moved well and was well received. I needed to sell a lot more than I did to hit #1 in a category (the guy at the top of the category I came closest on was #53 overall in the kindle store, and I had multiple Harry Potter books ahead of me in humorous fantasy), but I was #2 in satire genre fiction and #3 in two others for a long time. I supplanted both Feast of Crows and The Princess Bride, although I’ve fallen below both of them since. 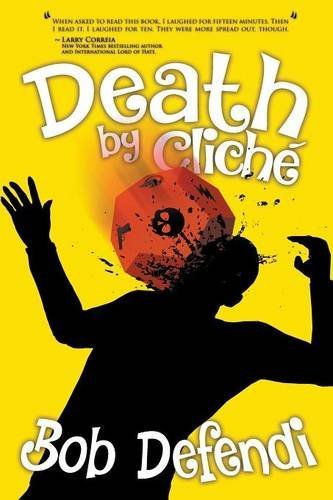 Since then I’ve been watching an interesting phenomena on Novelrank. For the most part, Novelrank always reports low for me, but since the sale, as my rank steadily degrades, it might be reporting high. It thinks I’m getting consistent sales every hour since the sale, but for once, it isn’t basing that estimate on my rank improving, it’s basing that on the speed at which my rank worsens.

I’ve checked with my publisher and they have my sales at about 1/8 what Novelrank reports (yesterday, at least). The thing we don’t know is how many Kindle Unlimited downloads we aren’t seeing. I’ll know better when my rank settles and I can compare the sales to actual ticks of my ranking in both directions.

But overall, it was a fruitful endeavor. If all else fails, a lot of people have Death by Cliché that didn’t previously.

And of course, you can still buy it for the normal price.

1
By Your First Amazon Sale (Your First Published Novel: Part 27)